REVISED AND UPDATED BY JASON SIELSKI, 2006

1683 Wang Ji — A Chinese envoy who taught Kempo in Tomari, Okinawa. The Wanshu

kata is still practiced in Tomari-te.

1756 Kusanku — A Chinese who taught Kempo in Shuri, Okinawa. He was originally

from the Fukien province.

training in Akata. He also studied for years in China, and later established the

the first to systemize Karate, and to name his style (Shuri-te) after something other

than his own name. He is also accredited as having formulated Basai Dai.

“House of little Tiger”) to Japan in 1922. Father of Japanese Karate.

including “What is Karate” and “This is Karate.” He is also the founder of

American Karate, as he introduced the art to the U.S. in 1946. He subsequently

Honolulu. He was one of only five of Mitose’s students ever to reach shodan.

shodan sometime after 1949. He also founded, with four others (Walter

Kentsu Yabu (1866-1937) — A student of Itosu’s, and the only known master ever to defeat Motobu in a shiai. He aided Itosu to open Karate to the public.

Chotoku Kyan, and later taught Soshin Nagamine, who was predominant in

along with Pa-kua. He is known as the foremost historian of the martial arts in the

U.S., and has written many books, including “The Weaponless Warriors.”

the mail). There, he taught with Master William Foster. He began his training with

Kim and Yahito Kauaguchi in 1956 in the Japanese Islands, where he was fighting

in the U.S. Navy. He then continued with Emperado in Hawaii. He was one of the

co-promoters of the first World Karate Tournament, held in Chicago, in 1963.

He began studying the martial arts with Lo Wei Doun in 1937, after boxing for

several years. Later, in 1960, he met Master Koeppel in Peoria, where they

opened a school. He subsequently founded the Yin Yang Do Karate Association,

and taught in Kenosha, Wisconsin. 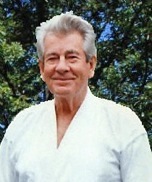